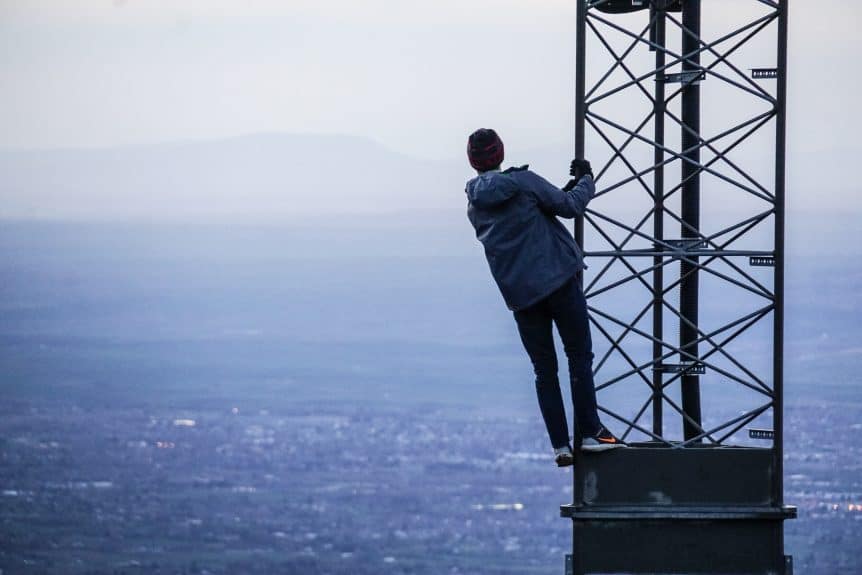 5G cellular networks are poised to become the next technological revolution that will vastly change people’s lives around the world. With their ability to transfer data up to 100 times faster than the current 4G technology, the new networks are expected to contribute to the emergence of self-driving cars, the development of virtual and augmented reality, and the so-called Internet of Things. They will also reduce our dependence on Wi-Fi and wired Internet, and even allow surgeons to perform complex operations remotely. The potential benefits of 5G networks can be very significant. Patent companies will earn billions in royalties, and countries with the largest and most reliable networks will benefit from technological advances through faster data transfers. But the 5G technology may also make it much easier for national intelligence and defense departments to spy on communication networks of adversary countries or disable these networks.

The 5G battleground between China and the U.S.

Currently, the United States and China are fighting for leadership in this area, as a part of the larger “trade war” between the two countries. Initially, China was perceived to be ahead in some respects. Since 2013, the Chinese government, Chinese mobile operators, and Chinese telecom equipment manufacturers have been working on developing and testing 5G. State funding, coupled with a huge domestic market, ensured that Chinese companies gained valuable experience and the economies of scale due to their ability to sell large amounts of 5G equipment within China. This learning curve and financial advantage was nurtured by the government with a view to dominating the next generation of telecom networks worldwide. China has made impressive progress in this regard — two Chinese telecom giants, Huawei and ZTE, account for nearly 40 percent of the global 5G infrastructure market. This infrastructure is expected to serve as the backbone for trillions of dollars’ worth of economic and industrial activity in an increasingly digital global economy. On the Western front, two European telecom giants, Ericsson and Nokia, have been supported by the U.S. For a while it appeared that — for the first time in many decades — the United States was the leader in a major technology sector that would form the bedrock of future innovation.

However, the United States has come to realize that China’s success in this market is a threat to its economy and to national security. Washington’s concern has been focused largely on the growing power of the Chinese conglomerate Huawei. In 2012, U.S. authorities asserted that equipment made by Huawei and ZTE could be used to spy on Americans. The White House and U.S. national security experts believe that these companies are too closely tied to the Chinese government, and that their equipment could give Chinese officials unlawful access to data and communications if networks across the world decide to use the technology from these companies. The companies have long denied that they are beholden to the government.

In 2019, Washington added Huawei to the list of companies that pose a threat to U.S. national security, and therefore restricted sales of American computer processing chips to Huawei thereby disrupting its supplier network. As of now, American companies must obtain prior appropriate licenses to work with the Chinese telecommunications equipment manufacturer. An indictment has also been filed in U.S. courts against Huawei for theft of intellectual property and for undertaking commercial activities in Iran and North Korea to bypass U.S. sanctions. China, in turn, has threatened to take similar measures against U.S. companies in retaliation and place restrictions on firms such as Apple or Boeing.

U.S. officials have asked its global allies to not use equipment made by Huawei, asserting that deploying China-made antennas and communication equipment on the soil of western states  will expose them and the U.S. to technological attacks or actions from China. In some cases, the U.S. has threatened to stop cooperating on intelligence with countries that do not ban the company. But that pressure campaign has had limited success. China, in turn, has threatened to retaliate economically against countries such as Germany and the U.K. that ban equipment made by its technology companies.

Countries are having to choose sides

The U.S. pressure has forced national governments to choose sides. For example, Australia agreed with the U.S. arguments and banned the use of Huawei and ZTE equipment to build its 5G networks. Other U.S. allies are thinking of imposing similar bans. However, the U.K. government agreed in January 2020 to Huawei’s involvement in building British 5G networks, with some restrictions. Huawei was also able to recruit Russia to its side. Russia is now allowing local cellular network providers to deploy Chinese infrastructure in Moscow. Israel has found itself in the middle of this clash; historically it is the U.S.’s most reliable ally, but it’s also trying to maintain a delicate relationship with Beijing. Currently the Americans are looking for a formal announcement from the Israeli government so they can be assured that Chinese 5G tech will be blocked.

Huawei loses to Ericsson and Nokia in Singapore

Given Singapore’s geographic location and political history, the country has tried to maintain good relations with both U. S. and China. But it is getting caught up in the dispute. The country is aggressively launching its 5G infrastructure. The country will begin rolling out new-generation service in January 2021, aiming to cover all of the city-state by the end of 2025. On June 24, 2020, Singapore’s Infocomm Media Development Authority (IMDA) announced that telecommunications companies (telcos) Singtel and a joint venture between M1 and StarHub had won the rights to develop two nationwide 5G networks. Sweden’s Ericsson and Finland’s Nokia are the telcos’ respective vendors that will provide the technologies to power the infrastructure. TPG Telecom, which counts on China’s Huawei as its vendor, may operate Singapore’s smaller 5G networks.

Singapore’s decision appears to be a win for the international campaign led by the United States to convince its allies that Huawei is a national security threat. Singapore is not a U.S. ally, but it is a close strategic partner, notably because its military facilities support U.S. Navy operations in Southeast Asia.

Does the 5G decision mean Singapore has chosen the U.S. in the technological cold war?

Despite the recent developments, it would be inaccurate to suggest that Singapore’s 5G decision is equivalent to the country choosing the United States over China. Singapore’s minister for communications and information explained that the country’s 5G decision-making process did not exclude any vendors but instead focused on performance, security, and resilience. The minister explained that telcos M1 and StarHub could consider Huawei, besides Ericsson and Nokia, for non-core elements of the 5G networks. Vendor diversity is a form of risk management, to minimize cybersecurity risks that could arise from over-reliance on a single supplier. Limiting Huawei to non-core elements of 5G networks may be a strategic step for Singapore. This step could preempt plausible supply chain disruptions to national infrastructure if the United States effectively severs Huawei’s global access to semiconductors.

Although the decision by Singapore authorities to limit Huawei’s share in its national 5G networks may appear to be a geopolitical gain for the United States, Singapore is continuing its bilateral cooperation with China (and Huawei) in other areas such as the digital economy, which could be construed as evidence of the ongoing pull of China to Singapore into its sphere of influence. It’s important to emphasize that Singapore values its independence and makes decisions based on its national interests. It is unlikely that U.S. pressure pushed Singapore to limit Huawei’s 5G participation. It is also unlikely that Chinese pressure pushed Singapore to keep its market open to Huawei. Given Singapore’s geopolitical reality, it seeks to balance relations with China and the United States, as both great powers are important to the region.

In view of the emergent bipolar world, Singapore’s choice of pro-American 5G vendors should strengthen U.S. confidence in Singapore. The two countries already have a strong bilateral defense partnership, underpinned by the Defense Cooperation Agreement that involves cooperation in five key defence areas, including military, policy, strategic, and technology spheres. The U.S. and Singapore are also deeply connected economically, the U.S. being the largest country’s investor. Foreign Direct Investments (FDIs) from the U.S. to Singapore hit over 20% of all investments in the country, accounting for more than $200 billion yearly over recent years. Consequently, following the 5G decision, areas of bilateral cooperation may expand and the American FDI figures are likely to stay stable or increase.

Beijing takes 13th place among the country’s biggest investors, with average FDIs totaling about $20 billion during recent years, 10 times less than those from the U.S. There is a chance that certain Chinese investors who are close to Beijing authorities may pull out of Singapore and sell real estate or relocating their firms out of the country; however, they will have fewer viable alternatives due to the ongoing crisis in Hong Kong, which was formerly regarded as an alternative to Singapore.

5G networks promise substantially faster speeds and the prospects of new commercial applications in industries as diverse as transportation and health care. The next generation of telecom networks — and the equipment for them that is currently being built — has emerged as a key venue in the battle for technological supremacy between the United States and China.

We are facing the emergence of a new bipolar world wherein 5G technologies will be controlled by two superpowers, with other countries having to choose between them. Singapore has tread these waters very carefully; it neither banned Chinese Huawei nor chose sides in this tech rivalry. Thus far, Singapore has based its decision on what would best meet its national 5G network needs. This decision also aimed to mitigate its cybersecurity risks and supply-chain disruption risks that could arise if the technology war escalates.