One of the major draws to incorporate in Singapore is the low corporate tax rates and strong financial incentives provided by the Singapore government. To provide more detail on Singapore’s approach to corporate taxation, this article covers:

How to register a new company in Singapore

How to register a foreign company in Singapore

How to obtain work or family visas for Singapore 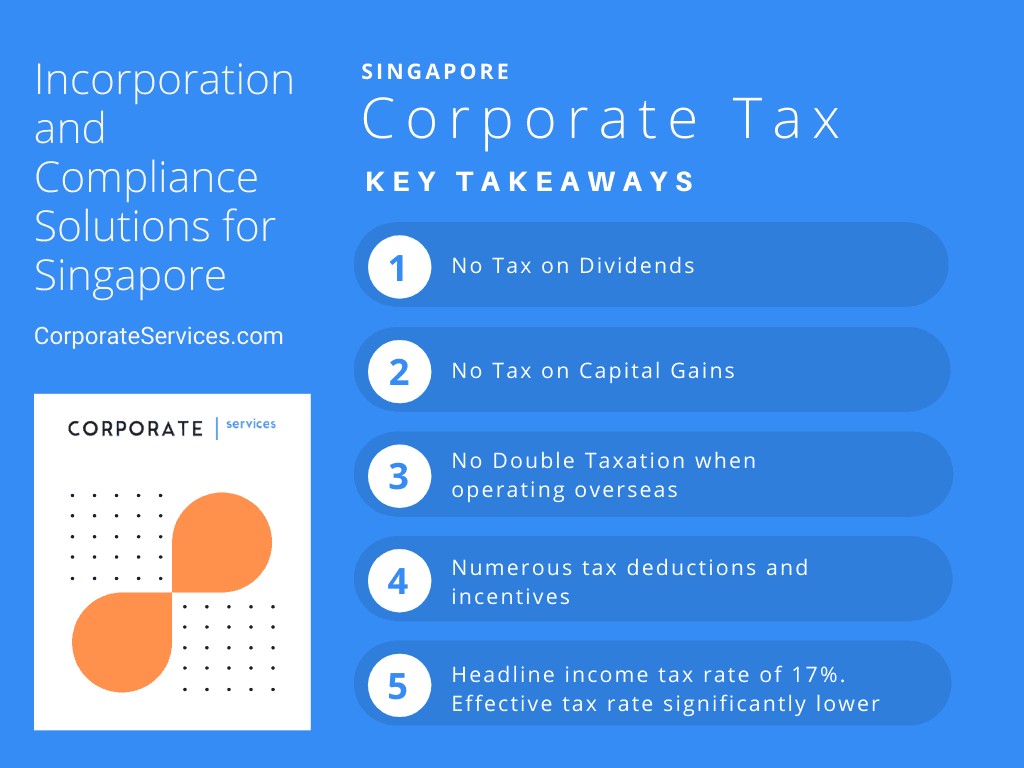 Singapore’s current headline tax rate is capped at 17%. However, with the tax exemption and incentive programs offered by the Singapore government, the effective tax rate for companies can be significantly lower.

Recently, CorporateServices.com conducted a survey of startup founders from five countries. To assess global sentiment about Singapore’s attractiveness as a startup location, the survey assessed Singapore on metrics considered important by entrepreneurs. Read our report for more details.

Under Singapore’s territorial tax system, qualifying income generated in Singapore and income remitted to Singapore from a foreign source is taxable. In Singapore, taxable income includes:

A company incorporated in Singapore is not automatically considered a tax resident of Singapore.

In general, the location of board meetings is a key factor in determining where a company is controlled and managed. Furthermore, the location of company personnel who have a key role in the company’s decision making can also determine tax residency.

Typically, a company is deemed to be a non-resident if board meetings and key management personnel are located outside of Singapore–even if the day-to-day operations of the company are in Singapore.

For example, foreign-based holding companies that only earn passive income are normally considered non-residents since these companies are run with instructions from owners and shareholders who are based outside Singapore.

Note that the tax residency of a company can change from year to year.

The benefits of being a Singapore tax resident

Companies that are tax resident in Singapore are eligible for the following tax exemption schemes:

To help local companies grow, Singapore introduced the new startup company scheme in 2005 which provides tax exemption on some of the income of a startup. Under the scheme, new companies that meet the qualifying criteria below receive the following tax exemption for the first three consecutive YAs depending on where the YA falls:

The above tax exemption is open to all new companies that meet the following criteria:

Note that certain companies are not permitted to use the tax scheme, including:

All companies qualify for PTE unless the company already claims under the tax exemption scheme for new startups. Under PTE, companies enjoy the following exemptions.

Certain types of foreign sourced income are tax exempt; these include:

To qualify as tax-exempt, foreign-sourced income remitted to Singapore must meet all three of the following conditions:

The following tax incentive schemes are available to further reduce a company’s taxable income if the company meets the criteria defined below.

Development and Expansion Incentive (DEI): DEI is available to companies that are planning to increase or upgrade their operations in Singapore or expand into globally leading industries. Under DEI, all income earned from qualifying activities is either tax exempted or taxed at a rate of 10% for a period of 5 years.

Companies are required to meet certain criteria to qualify:

Productivity and Innovation Credit (PIC) Scheme: PIC offers companies a 400% tax deduction or allowance on certain expenditures incurred in any of the following six qualifying activities:

Due dates for tax return filing

For more detailed information on tax return filings with IRAS, consult our guide on annual return filing in Singapore.

Basis Period and Year of Assessment (YA)

It is important to understand the concept of the Year of Assessment (or YA) and Basis Period to appreciate how Singapore taxes are calculated. A company is taxed on the income earned in the preceding financial year. This means that income earned in the financial year 2018 will be taxed in 2019. In this example, 2019 is the Year of Assessment (YA). Thus, the YA is the year in which your income is assessed to tax.  To assess the amount of tax, IRAS looks at the income, expenses, etc. during the financial year. This financial year is known as the “basis period”.  The basis period is generally a 12-month period preceding the YA. So, if a company’s Financial year end is on March 31 of each year then for YA 2019 its Basis Period will be 1 April 2017 to 31 March 2018.

To decrease the tax burden on companies that receive income from foreign sources, Singapore has signed Avoidance of Double Taxation Agreements (DTAs) with over 80 jurisdictions – including major economies in the Americas, Europe, and Asia. The DTAs reduce or eliminate taxes on foreign income that has already been taxed in a foreign jurisdiction.

In some situations, a tax credit may also be available. If the foreign tax was paid in accordance with the DTA provisions then the lower of a) the foreign tax paid and b) the Singapore tax that would have been payable on the same income is calculated. If the company has paid any excess tax this calculated amount in a foreign country then it can be claimed as a tax credit in Singapore, known as Double Taxation Relief (DTR). Under DTR, a company can claim some of the foreign income taxes that it has paid against its Singapore income taxes and receive that money back from IRAS.

Furthermore, since 2008, the Singapore government has offered a unilateral tax credit to companies with foreign income sourced from a jurisdiction without a DTA with Singapore.

Note, to receive a foreign tax credit, companies must meet the following requirements:

Singapore is one of the most favorable tax jurisdictions in the world. With a low headline tax rate and generous tax exemption and incentives, companies in Singapore can greatly reduce tax expenses. Furthermore, the tax exemption on capital gains and dividends ensures that shareholders benefit more from their investments.

Finally, the Singapore government’s effort to sign Avoidance of Double Taxation Agreements allow companies to establish in Singapore and expand internationally without the burden of paying extra taxes on foreign-sourced income.

Both ECI and FORM C are filed annually and can be submitted electronically. Splitting of tax return filing into two separate steps (ECI and FORM C) is a smart strategy by Singapore government for the following reasons:

Small companies are allowed a submit a simplified version of the Form C called Form C-S. A company is eligible to file the Form C-S if it meets all of the following conditions:

GST registered companies are required to file their Goods and Services Tax (GST) payments and reports. For more information, consult our guide on filing GST returns.

One of the fundamentals of Singapore accounting standards is accrual-based accounting. According to this concept, revenues are recorded when earned and expenses as they occur. In addition, financial statements prepared on this basis record obligations to pay cash in the future.

A corporate tax return must be filed by all companies. However, a dormant company is allowed to skip filing in case it is granted a Waiver of Income Tax Return Submission. To be released from filing the income tax return obligation, a company must meet the following conditions:
Headline corporate income tax rate is a basic rate of taxation prior to deduction for various factors, such as tax exemption, tax incentives, and depreciation rules. The effective rate is generally lower. Currently, Singapore’s headline corporate tax rate is a flat 17%.

To begin with, the process of calculation starts with determining the net profit. In order to come to the final amount of taxable income, the following adjustments are applied:

However, you should bear in mind that some types of expenses are not deductible.
Therefore, you will have to add them to your taxable income. Among them are the following:

To facilitate the process of filing tax returns and preparing tax computations, IRAS created the Basic Corporate Tax Calculator (BTC) that assists business owners to compute the amount of taxes they need to pay. In addition, you can take advantage of the explanatory notes and validation that helps to avoid errors in computations.

Most Singapore companies will hire the services of an accounting firm such as our firm to handle their corporate tax returns and to avoid errors and to ensure all applicable deductions and incentives are taken advantage of.

Please keep in mind that the place of incorporation of a company is not necessarily determinative of the tax residence status.

As already mentioned above, the tax residency of a company is determined by where the business is controlled and managed. Consequently, if the strategic business functions and operations of your Singapore company are executed in Singapore and at least some of your management staff is located in Singapore, your company will likely be treated as a tax resident company.

Every company in Singapore has to fix its own Financial Year End (FYE) which refers to the end of the company’s accounting period. You should carefully choose the FYE since it determines when your financial reports need to be prepared. There are no strict requirements regarding the date on which a financial year should start or end. Here are certain guidelines from us that you can consider while choosing the FYE:

Note that for all companies incorporated on or after August 2018, the first financial year must end within 18 months of the incorporation date.

Also, it is possible to change your FYE even after incorporation. In this case, you have to make the “Change of Financial Year End” transaction through the BizFile to notify ACRA.

All Singapore companies are obliged to keep competent records of their business transactions for a period of five years from the relevant year of assessment (YA). In particular, you should maintain accounting records, bank statements, copies of receipts, invoices, payment vouchers, and tax computation to this period. Keep in mind that it is necessary to store all source documents.

If you fail to meet these requirements, there is a risk that penalties will be imposed and claimed expenses may be disallowed.

There is a wide range of accounting software that stores information and facilitates record-keeping. You can get acquainted with the software that is in compliance with IRAS’ technical requirements in the IRAS’ Accounting Software Register. Your corporate services provider, such as our firm, can also perform this task for you.

Yes, companies in Singapore can benefit from an extensive range of industry-specific tax incentives and concessions. You can get an overview of various tax incentive schemes depending on the industry sector in the table below.

Deductible business expenses must satisfy all of the following requirements:

It is not mandatory to hire a tax agent, although most of the Singapore companies utilize in-house or external tax professionals to ensure that all corporate tax issues are managed in compliance with all Singapore laws and requirements and that their tax strategy is fully optimized.

All companies in Singapore must pay their tax within one month from the date of the Notice of Assessment (NOA). Even if a company has filed an objection, it is still required to pay its corporate tax. If the tax isn’t paid by the due date, a 5% penalty is assessed. Subsequently an additional 1% penalty will be imposed for every completed month; the 1% penalty will be imposed per each terminated month that the tax is still unpaid, up to a maximum of 12% of the tax overdue. Subsequently, a company may confront further enforcement actions including legal actions by IRAS.

Singapore on track to become the de-facto FinTech, Crypto and Blockchain Haven

Our team of experts delivers comprehensive services on a world-class platform at affordable prices — it is the best of all worlds.

Why Choose Us
See Our Offers
Start and manage your company online — anywhere, anytime!