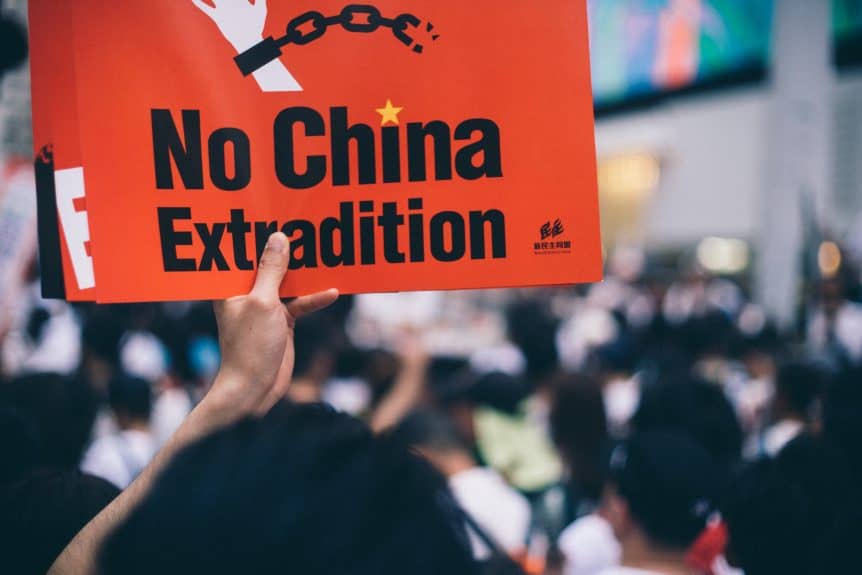 Over the past year, Hong Kong has been roiled by on-going violent protests. The turmoil and its underlying political and economic problems are affecting the business climate of the city. Given the unfortunate confluence of recent events, Hong Kong runs the risk of a ‘systemic collapse,’ which would push its economy into a deep and long-lasting crisis. As these risks mount, its companies and citizens are searching for alternatives and Singapore has emerged as a destination for them. This post explores the question — is Singapore a genuine oasis for these parched Hong Kongers or is it just a mirage?

No End in Sight for Hong Kong’s Turmoil

Since June 2019 — for eight months in a row now — Hong Kongers have regularly protested in its streets. The police have cracked down on these marches, often very violently. Police brutality itself has now become a major gripe of the protestors as both sides adopt increasingly hard stances. The initial spark for the protests was a bill that would have allowed the extradition of Hong Konger to China for certain crimes. Such a bill would have dealt a death blow to China’s “one country, two systems” promise — the agreement under which  Hong Kong maintains a separate financial and legal system from the mainland. The current laws, which date from the British administration of Hong Kong, expressly prohibit extradition to China and any territories considered part of it. In early September, Hong Kong authorities, under pressure from protesters, decided to withdraw the bill.

But the police used disproportionate force, resulting in several injuries and the arrest of thousands. The protestors have now expanded their demands to include the resignation of the Carrie Lam government, granting of direct suffrage to Hong Kong, the creation of an international commission to investigate police crimes, and the rejection of the official classification of protests as “riots.” These demands remain unfulfilled; hence, the ongoing protest movement.

Another problem facing Hong Kong is the US-China trade war. It is an ongoing economic conflict between two of the world’s largest national economies. US president Donald Trump imposed tariffs and other trade barriers against China in 2018, in order to stop what the U.S. terms China’s “unfair trade practices.” Among the US complaints are the growing US trade deficit, China’s theft of US intellectual property, and the forced transfer of American technology by foreign firms that operate in China.

Hong Kong has been the re-export hub between the two countries for many years, and its largest trade partner is the PRC. Thus, Hong Kong is right in the middle of the millstones of this trade war. Its economy continues to suffer as the grinding dispute lingers on and slows down the trade between its two largest trading partners.

A new problem Hong Kong faces today is the coronavirus outbreak. As of this writing, the city has 50 confirmed coronavirus cases and one death.

Hong Kong’s trade unions — including hospitals, subway and rail workers — are threatening to go on strike if the government does not close the border with mainland China to prevent the spread of coronavirus. Unions consider Hong Kong leader Carrie Lam’s decision to suspend high-speed rail and ferry services to mainland China insufficient. Lam, in turn, considers that closing the entire border would be an extreme political and security measure — it would be the first such border closing for the territory since Britain handed it back to China in 1997. On the other hand, trade unions are ready to start stage-by-stage strikes if their demand is not met.

The dispute and risks associated with this novel virus, adds another layer of instability and uncertainty to the economic future of a city that is already dealing with a “once in a lifetime” social and political crisis.

Hong Kong’s economy entered a technical recession in October, its first in 10 years. But the cumulative impact of the new risks described above portent a grave economic crisis for this city of 7.4 million.

At present, Hong Kong’s international airport and parts of its subway system face ongoing disruptions from protests and a steep fall in business. Tourism to the city has fallen off a cliff; according to Hong Kong Tourism Board traveler arrivals fell 56% to 2.6 million in November, and mainland tourists dropped 58% to 1.9 million, compared to a year earlier.

The loss of tourists has had a devastating impact. A number of Hong Kong’s high-end malls are closed. For instance, Louis Vuitton has announced the closing of one of its shops in the commercial district of Causeway Bay after declining profits. The new restriction on travel out of China and the temporary shutdown of major tourist sites such as Hong Kong Disneyland due to Coronavirus will simply add to these troubles.

Over the long term, Hong Kong’s future remains in doubt. Its agreement with China permitting it a “high degree of autonomy” is set to expire in 2047. But many fear that the day of reckoning may be much closer and China will soon decide to exert extreme measures to quell the protests. That will put an end to Hong Kong’s free-market capitalism and the country will become yet another cog in the nepotism-driven corrupt Chinese economic system. The rule of law will be no more, and the country’s polity will be run by authoritarian dictats from Beijing.

Hong Kong’s problems have prompted many of its residents to look to that little red dot on the maps of Asia. These Hong Kongers are attracted by its excellent location, famously business-friendly regime, corruption-free politics, British Common Law based legal system, and its robust Current Account Balance. This interest from Hong Kong has resulted in Singapore enjoying its largest-ever share in Southeast Asian foreign direct investments (FDI): US$110 billion, a 42 percent increase in 2019 compared with 2018. According to the United Nations Conference on Trade and Development (UNCTAD), Singapore’s 2019 foreign direct investments are the third-highest of any country – with very robust growth in the information and communications sector. The 2019 ASEAN Investment Report states that more than 80 percent of FDI in finance in ASEAN last year went to Singapore.

All this creates very good economic prospects for Singapore in 2020, as it will continue to divert visitors and economic activities away from Hong Kong.

The turmoil has resulted in many Hong Kong companies exploring Singapore as a place to relocate. Some are preliminary, but the business-friendly Singapore economy will not take long to entice Hong Kong’s enterprises. Most Hong Kong based companies are of a size where they can easily afford to set up a foreign subsidiary. But such a move is now viewed as an insurance policy against catastrophic events in Hong Kong. While the impetus for such relocation was present even before the protests started, recent events have hightented it.

Fund management is a good case in point. According to the Monetary Authority of Singapore, in the past half year, the total number of fund management companies licensed and registered by the MAS grew by almost 9% in less than eight months, from 820 in May 2019 to 892 as of Jan 8, 2020. At the end of 2018, the number stood at only 780.

Related article: How to relocate a Hong Kong company to Singapore

Another result of Hong Kong’s crisis is Singapore’s red hot real estate market. In addition to Hong Kong’s troubles, other factors are also contributing to this performance. A large number of new houses and condos are being built on the island. Perhaps the most important reason is the steady increase in foreign investment in the country; the property market has come to be regarded as a very safe and good place for investment in Singapore. Several high-profile investors have made this move. One is James Dyson, who bought the Wallich Residence super penthouse for $73.8 million and a Good Class bungalow on Cluny Road for $41 million. Another is Chinese billionaire Jack Ma, of Alibaba, who acquired a 30,000-square-foot piece of land to build a two-story home with a pool.  Facebook co-founder Eduardo Saverin bought a $230 million property on Nassim Road.

Singapore’s property market is regulated by the government. The Singapore Residential Property Act regulates pricing and allocation of permits for foreign investors. The law ensures that such investors aren’t buying the property for speculative purposes, which helps maintain stability in the market.

While past performance is no guarantee of the future, buying real estate in this country has been very profitable. In 2018, Singapore’s luxury real estate prices increased by 9.1 percent.

Singapore Schools and Universities for Students of Hong Kong

Hong Kong’s unrest has encouraged its citizens to look closely at Singapore for quality of life considerations. The International School of Singapore, one of educational establishments in Singapore providing programmes of elementary, middle, and high school, says inquiries from Hong Kong parents increased 60 percent in 2019 compared with previous years. Other international schools have experienced similar interest from Hong Kong families. The GEMS World Academy (Singapore), also reports that inquiries from Hong Kongers have doubled since November last year.

While the turmoil may be the most proximate cause, parents are also interested in Singapore’s bilingual system, its globally top-ranked schools and its highly ranked universities. The Chinese government is beginning to exert more control over educational content in Hong Kong, annoying parents who want free and open exposure to ideas for their children. Many parents also feel Hong Kong is too polluted and therefore not a child-friendly environment.

Singapore schools and universities welcome students from abroad including from Hong Kong. This welcome smoothens the challenges of leaving Hong Kong and and moving children to Singapore.

The 2019 turmoil in Hong Kong has resulted in increased interest in opening offices, investing in real estate, relocating business, and moving to Singapore. Parents are considering moving to Singapore from Hong Kong because they are attracted by the city’s schools. These factors have boosted Singapore’s 2019 foreign direct investments to the fourth highest of any country and contributed to the country’s economic health.

If you are considering such a move for yourself, your family or your business, please contact the CorporateServices.com team. Our staff can help you evaluate if such a strategy makes sense for you and if so, help you execute the move to Singapore.