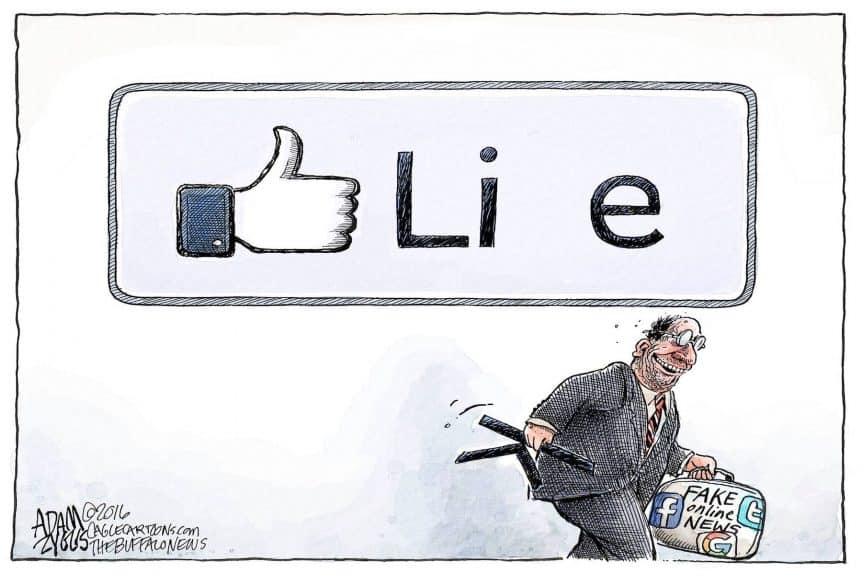 Since the 2016 US Election, “fake news” has dominated discussions in political, technology, and media circles across the globe. It is a contentious issue that requires a nuanced balance between the freedom of press on one hand and the dangers of propaganda and rumor mongering on the other. “Fake news” is usually defined as deliberate or accidental misinformation that is spread via online social media. The ease with which such content can be created, published, and consumed and the lightning speed at which it can spread across the globe makes it a vast threat.

Numerous studies have assessed the scale of threat posted by fake news to the polity of a nation. For instance, MIT research led by Soroush Vosoughi shows that false information significantly outruns true information — a false story reaches the first 1,500 people approximately six times faster than a true story does. Evolution has selected us to focus on information that arouses strong emotions; there is a survival benefit to spreading such news further and faster. But these evolutionary traits are not suited for the information battlegrounds of the Internet; in fact, over the long term they may even have a selective disadvantage for group survival!

But identifying, tracking and controlling unreliable content is not easy. Even when there is evidence that a fake story being circulated online, removing it or preventing people from reading or sharing it runs afoul of the core notions of a free society and evokes parallels to Orwell’s 1984 “thought police”. Therefore, no global consensus has emerged yet on how best to confront fake news. But Singapore has decided to take the issue head on.

The conduct of free and fair elections is seriously threatened by fake news worldwide. This issue has particular resonance with Singapore given the country’s tumultuous history with racial and economic strife in the 1960s. Singapore’s People’s Action Party (PAP) has focused on this vulnerability. It has worked for two years to pass the Protection from Online Falsehoods and Manipulation Act (POFMB) that aims to stop the spread of false and hateful content. The law came into effect on October 1, 2019 and is designed to ensure the peace and stability of this country that counts people of different ethnicities, religions, and cultural backgrounds among its citizens.

POFMB law requires online platforms — such as social networking and news aggregation services — to issue corrections or remove content that the government considers to be false. It also gives authorities permission to put warnings next to posts that are suspect and, in extreme cases, to take them down. These powers are to be used when the government deems that a false statement may be prejudicial to Singapore’s security, public safety, or tranquility. The penalties for non-compliance are serious; violations of the law can result in a financial penalty of up to S$1m for a company and imprisonment of up to 10 years for an individual.

During the last week of November, 2019, the law was invoked twice. In the first instance, a Facebook post published by Brad Bowyer, a member of the country’s opposition party, criticized the country’s sovereign wealth fund for its investment in a company and implied that Singapore government officials influenced the fund’s “commercial decisions”. The government disputed this implication and asserted that it simply helps appoint the fund’s boards and then holds them accountable for their performance.  The Singapore government called Mr Bowyer’s statements false and demanded a correction. In response, the post was updated by with the following phrase: “this post contains false statements of fact, for the correct facts, click here.”

In the second instance, a Facebook post was published by an Australia-based blogger, Alex Tan Zhi Xiang. Mr. Tan runs a blog called States Times Review. He was accused of publishing falsehoods about the arrest of a “whistle-blower” in Singapore who had supposedly revealed the religious affiliations of a politician connected to Singapore’s ruling party, a potential source of controversy in a country with many ethnic and religious groups. The blog also claimed that elections in Singapore were rigged. The authorities considered the post to be “false and baseless” and requested Mr. Tan to edit it. He refused citing his Australian citizenship and stating that he would not comply with an order from a foreign government.

Under the POFMB, the government then asked Facebook to publish the correction notice instead. Facebook capitulated; through a spokeswoman it told CNN Business that it had labeled the posts as containing false information “as required by Singaporean law.” Incidentally, the original blog post on the States Times Review is still available since it is run out of Australia. But Mr. Tan has added the following line to his post: “The Singapore government claimed that no arrest was made. This runs contrary to the tip-off we received.”

In another POFMA dispute, in December, 2019 a small Singapore political party — the SDP — placed a “correction notice” in one of its Facebook posts that contained a link to a government webpage where “the correct facts” could be viewed. Thus, it appears the law is working as intended — information is not being censored, rather on controversial topics the government is able to provide alternative facts to the readers so that the readers can make their minds independently.

In light of these developments, what guidelines should a Singapore business follow in order to stay in compliance with the Protection from Online Falsehoods and Manipulation Act? We have a list handy: