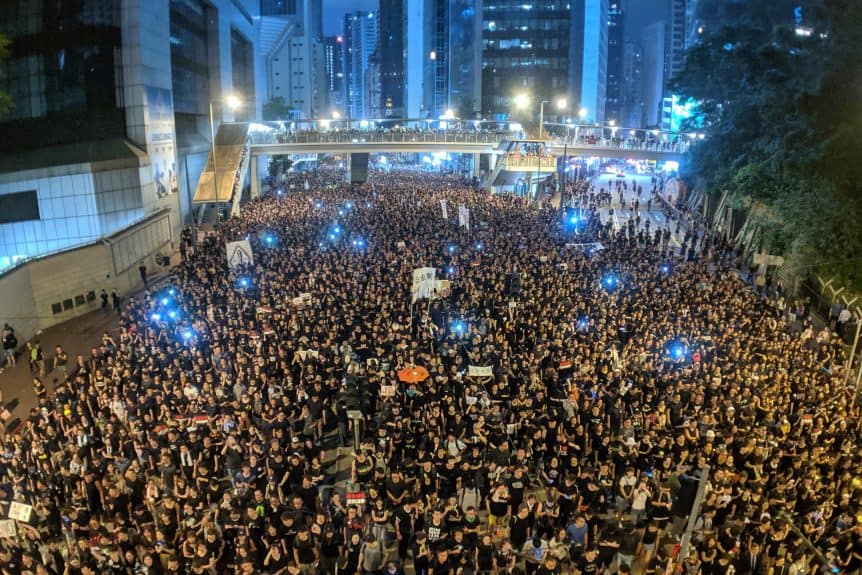 Our original post was published on July 3, 2019 but the situation in Hong Kong continues to deteriorate. Therefore we have updated the post to reflect the latest events in Hong Kong. If you are a business owner currently operating in Hong Kong, you may want to read our guide on how to move your Hong Kong business operations to Singapore.

December 5, 2019: After the recent election results, Hong Kong’s prospects have grown dimmer and Singapore’s long-awaited moment may have arrived, reports Bloomberg. “There’s definitely no turning back to the pre-June environment in Hong Kong,” said Logan Wright, a director at Rhodium Group who heads the research company’s China analysis.

November 11, 2019: Rule of law in Hong Kong is on ‘brink of collapse’, police has warned. The warning came a day after the territory saw a marked escalation in violence, with police shooting one activist in the torso. Investors from China are now overwhelmingly choosing Singapore over Hong Kong.

October 31, 2019: For the first time in over a decade, Hong Kong has plunged into a recession as the economy shrank 3.2% in the last quarter. The months-long protests have forced businesses to close, paralyzed public transportation and scared off tourists. With the turmoil showing no sign of abating, the economy is expected to worsen in the coming months. “Frankly, there is no room for optimism,” embattled Hong Kong Chief Executive Carrie Lam said on Thursday.

July 3, 2019 – The recent news out of Hong Kong has been grim. Massive street protests that began last month continue and have now turned violent. Hong Kong’s reputation as an international financial hub lays in tatters. Free trade, impartial courts, freedom of expression, political stability, safety, rule of law, and independence from Beijing were its key attractions to international business; these are all at risk now. A drain of foreign firms out of Hong Kong has begun, with Singapore emerging as the biggest winner.

Background of the Protests

The turmoil started last month when nearly 2 million protesters took to the streets to oppose a new bill that would allow Hong Kong residents to be extradited to China. Although the bill has now been indefinitely suspended, the protests have continued.

The protests are a manifestation of deeper problems that extend beyond the extradition bill. They come nearly five years after the 2014 pro-democracy protests that blocked streets in the city’s center for months. At their root, they are an outcry against China’s failure to abide by the “one country, two systems” commitments it made when it took over control of Hong Kong from Britain in 1997; tellingly, the most recent demonstrations on July 1 coincided with the anniversary of this transfer. These commitments were made as part of a Sino-British Joint Declaration and through them China guaranteed that the freedoms Hong Kong enjoyed as a former British colony would continue for at least 50 years. These freedoms include an independent judiciary, free market economy, rule of law, democratic elections, and freedom of the press.  But China has insidiously weakened these freedoms. While Hong Kong maintains the veneer of a common law jurisdiction that abides by the rule of law, these trappings are being abused to achieve Beijing’s authoritarian objectives. Mainland China’s nepotism, media censorship, “managed” democracy, and state control of the economy are creeping up in Hong Kong. For instance, even the Hong Kong Companies Registry has been politicized, as evidenced by the Joshua Wong case.

The protests show no signs of abating. The movement has now extended its demands to include a full withdrawal of the extradition bill (instead of its mere suspension); the resignation of the city’s chief executive; and an independent inquiry into police brutality against protesters during the demonstrations. On the other hand, China’s leadership shows no signs of backing down; on Tuesday it accused the protesters of being “extreme radicals” who had committed an illegal act “that tramples on the rule of law and jeopardizes social order”.

According to China scholar Geremie Barme, the protests in Hong Kong are part of the global conflict between frustrated youths and sclerotic authoritarians and they will play out along a familiar script. “The old are consuming the young to maintain their longevity,” according to Barme. The government will stonewall, fueling public anger that, in some cases, will result in extremism. Then, the government will display contrived sorrow, quell the “riot” and crushe the opposition, under the pretext of “public safety.” As anticipated by Barne, China’s state media has pledged a policy of “zero tolerance” for Hong Kong’s “open and symbolic attack.”

Impact on the Business Community

The protests and the extradition bill have created a sense of foreboding in Hong Kong’s business community. It fears that the proposed bill exposes foreign and local employees, who are currently protected by the autonomy Hong Kong enjoys, to legal risk. If the bill is passed, China’s notoriously corrupt, nepotistic, and  state-controlled judicial system will be able to exert its power over these employees. That prospect will deter talented professionals from working in Hong Kong.

Some of the specific risks that are raising concern include:

Given these threats, several businesses have already started their mitigation strategies. Property developer ESR Cayman canceled its HK$9.76 billion ($1.24 billion) IPO listing “in the light of the current market conditions”. A wealthy investor reportedly shifted more than $100 million from a Citibank account in Hong Kong to Singapore, according to Reuters. Several private banks report that clients have decided to move money out of Hong Kong in response to the recent turmoil, said one person in the private banking industry.

Thus, the uncertainty over the bill threatens one of the main pillars of growth in the former British colony – wealth management. On this front, it is losing ground to Singapore. In a survey by Asian Private Banker, 58% of the respondents ranked Singapore as the most preferred offshore wealth management hub.

What Are Your Options

“The outcome could be a drain of multinationals to other cities in Asia, with Singapore the most likely beneficiary.”

Singapore and Hong Kong have competed to be Asia’s pre-eminent financial hub. Their geographic location, size, cultural patrimony, multicultural ethos, history as a former British colony, market-friendly economic policies, and low tax regimes have been very similar. Therefore, the most obvious destination for companies moving out of Hong Kong is Singapore. The Singapore government recognizes this opportunity; but, in the spirit of being a good neighbor and trading partner, it has requested its business community to not woo business away from Hong Kong.

But many are already making that choice. Gillem Tulloch of GMT Research Ltd. is considering moving his firm out of Hong Kong, most likely to Singapore. Rahul Sen, a partner at Boyden, said three of his multi-office wealth advisory clients decided in the last few weeks to hire teams of bankers in Singapore after initially considering Hong Kong.

“… they are asking why should they align with Hong Kong when the future of Hong Kong itself as an independent wealth hub is uncertain.”

CorporateServices.com has also seen a sharp uptick in the number of clients who are exploring a relocation of their Hong Kong-incorporated company to Singapore. Singapore company incorporation process is simple, well-defined and can be executed quickly. Immigration options are available for skilled staff and their family members for possible relocation to Singapore. If you are evaluating such a move for your Hong Kong-registered company or for your personal investments, talk to us. We would love to be of help.